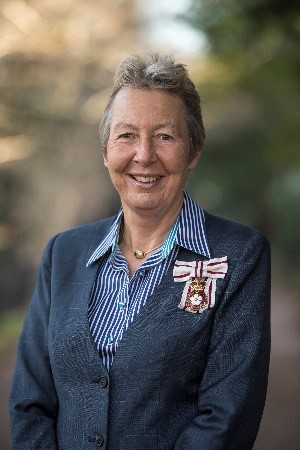 Mrs Julie Spence is Lord-Lieutenant of Cambridgeshire, appointed in April 2017.

Four years at Liverpool University and I M Marsh College of Physical Education where Julie trained to teach PE and Biology. Moved to the West Country to take up a teaching post but soon discovered teaching was not for her.

In 1978, joined Avon and Somerset Police and was posted to South Bristol. After postings to CID, community policing, the force communications centre, the Family and Child Protection Unit, the Press Office and uniform operations, Julie was seconded to the Association of Chief Police Officers secretariat in London for two years.

In 1999, appointed to Assistant Chief Constable for Thames Valley Police, where she held the Corporate Development and Territorial Policing portfolios.

In the Queen’s 80th Birthday Honours, Julie was awarded an OBE for her management of complex and contentious organisational issues, leadership of Thames Valley’s contribution to the operations to protect Heathrow and the Queen Mother’s funeral, her work for the ACPO Terrorism and Allied Matters Committee on Royalty and VIP Protection and her strong leadership and determination in taking forward the Gender Agenda and the development of the British Association of Women in Policing (BAWP), which have both become major drivers for gender equality in British policing. She was President of BAWP for 10 years (2000-2010).

In 2008 she was awarded an Honorary Doctorate of Laws by Anglia Ruskin University: then in the 2010 New Year’s Honours list she received the Queens Police Medal (QPM).

In September 2010, after a 32 year career, she retired from policing.

Julie is Chair of the Cambridgeshire and Peterborough NHS (Community and Mental Health) Foundation Trust , a Governor of Anglia Ruskin University, Chair of Wellbeing of Women (Cambridge Branch) and a Trustee of Ormiston Families.